The Earth on Which we Tread 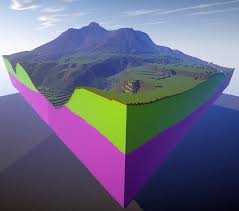 Having spent quite some years on the study of space
under the guidance of all-knowing D A C E,*
I decided this year to reduce my ambition
the close study of Earth is my new mission

Planet three, out of nine*, strung out from the Sun
geologists make sure that it’s their number One,
Tucked neatly away between Venus and Mars,
for them Earth’s as great as all the bright stars

Geologists aver in their theories heretical,
that “built in seven days” is really quite fanciful
Four point six billion years – perhaps even longer,
they claim that was needed to bring chaos to order.

The history of time is a remarkable thing,
stretching right back like in a limitless string
Earth formed its core, its mantle, then crust,
that’s the top layer in which we must trust

The picture we have of our planet today
resulted as forces had their sway
Volcanoes, earthquakes, even plate tectonics
produced effects which became rather chronic

Rocks seem to move in a kind of a cycle,
pushed up to the top like the cream on a trifle
Then they crumble and fall, get all twisted and bent,
and sink down below to form deep sediment

Igneous rocks are derived from the lava
Metamorphics, from some squeezing palaver
Sedimentary rocks, on the other hand,
at least give us chalk, mudstone, and sand

Geological time has titles heroic,
Precambrian, Palaeozoic, Mesozoic, and Cainozoic
Mastery of these can not be avoided,
and furthermore, each is then sub-divided

Palaeozoic divides at least into six,
Each time-scale gets learners into a fix
Permian and Silurian present no clear goal,
at least Carboniferous gave us King Coal

Mesozoic and Cainozoic span many millions of years,
for inquiring students they present little fears
Dinosaurs popped up (and down) within the Jurassic,
perhaps had their debut in ancient Triassic

Geologists claim that the continents drift,
one of their statements leaves us quite miffed
Our weather will never be better later,
now that Ayr no longer strides the equator

Fossil records help throw light on our dark,
some of these beauties are in Victoria Park!
Many solid rocks were once quite organic,
they’ve been long dead – so no need to panic!

The earth below has many treasures,
discovering these holds untold pleasures
Coal, oil, and gas yield mighty power,
from ages past a generous dower

Minerals are found in every hue,
Emerald green to Sapphire blue
Diamonds command a heavy spend,
but are they still “a girl’s best friend”?

Gemstones’ names are shrouded in mystery,
much of it in long past history,
Chemistry too, sheds some light,
thus yielding quarts, gypsum and calcite

After rocks were formed, then vegetation,
creatures had some habitation
Through these primeval early traumas,
evolved the lower palaeozoic faunas

Then given time – in endless ages,
primitive creatures joined history’s pages
Mammals very late in all this plan,
not two million years – the story of man

Our late appearance is a fact,
but humans make a huge impact
In search for food and habitation
Mother Earth has felt our exploitation

We need to live, we need to strive,
any less and we would not be alive
Geologists’ concern for conservation
shows it’s vital to our preservation

So when on heath and earth we bound
Spare just a thought about the ground
On which we tread and take our leisure
Beneath our feet, world without measure

2 thoughts on “The Earth of Which we Tread”