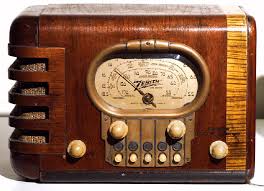 The Home Service also has some local opt-outs
Scotland, Midland, Northern, and Wales to try out
The Third programme is for the intellectual mind
The Light programme for the rest of us  – unrefined!

The radio dials show that signals came from far and wide
Budapest, Munich, Paris, all on the Channel’s other side
Moscow, Brussels, Oslo, and somewhere called Hilversum
Apparently a town in the Netherlands not far from Amsterdam

Other stations that spread transmissions in the ‘ether’
Dublin, Hamburg, Strasbourg, and Lille feature
Back in middle England the Droitwich name
A major Long Wave transmitter of great fame

And let’s not forget that early rebel commercial pioneer
Radio Luxembourg on 208 filled the legals with such fear
It spawned the growth of pirate offshore DJ shows
And taught modern presenters all they know!

Religion was not neglected with broadcasts from the Vatican
And no doubt the other churches featured in the plan
To use the radio to ‘inform, entertain, and educate’
Which broadcasters even today claim they emulate

So there we have it, a nostalgic backward glance
Even in those early years quite an expanse
Of those with a message to spread by the radio emitter
Today surpassed by Facebook, Skype, WhatsApp and Twitter!

see also: Radio, the Listener’s Window on the World