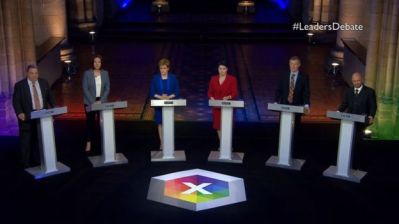 Why have I developed such revulsion to the Leaders’ debates?
Perhaps it is because at present their rhetoric so dominates
I should appreciate that all this is intended to educate and inform
By why must their tempers so quickly rise like a gathering storm

Wouldn’t it be nice if each of these earnest protagonists
Could approach the others as friends not antagonists
Why could they not address their rivals with a wide open smile
Rather than a verbal onslaught, completely hostile?

Above all I wish they would stop shouting over each other
If they heard a replay they would quite soon discover
That only one at a time can really be heard
And calm, cool, presentation would be much preferred

However, I doubt if my pleadings will change their approach
Despite any prior efforts from a slick media coach
Perhaps it would be better if, like wrestlers, they were put in a ring
And at least they might then stop feuding when they hear the bell ring!