Even today you will find Singer machines
in Asian sweatshops and chic fashion houses
But in Clydebank, Singer was also renowned
for its massive factory clock on a tower

For miles around, this monstrosity could be seen
Signifying industrial power and market domination
But like so much of Scottish industry it met with decline
And even the clock gave its final tick in March 1963

When the clock first appeared in 1885 in Clydebank,
then the European headquarters of this early multi-national
It signified the wealth and importance of the enterprise
And its enormous timepiece was a symbolic crown on success

Over the years of the 20th century several changes
were made to the clock. The dials and numerals
were redesigned and various forms of illumination
were employed, inside by gas, outside by spotlights

None of these was very successful, being too dim
or casting unwanted shadows from the internal machinery
In 1928 a total of 145 lamps were attached to the hands!
Then World War II snuffed out illumination and almost Clydebank

After the war, when some normality was restored
The clock came back into service with new enamelled
“Singer” signs re-lit for all to see from far away
But the fate of the clock was on the horizon

In 1963 the clock was finally ceremonially stopped
“As part of area reorganisation in the interests of
production with a smaller labour force”
The aluminium hands were made into souvenir ashtrays!

This was before smoking (and domestic sewing machines) became much less fashionable! 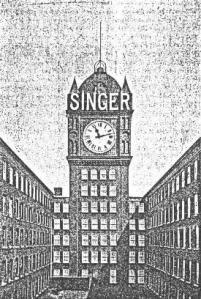