Perhaps it is the ancient rivalry between Scotland’s two major cities
Or just some kind of inertia which has kept Glaswegians from visiting
The National Museum of Scotland – situated in the capital
But having discovered it recently, I assure you this is a treasure
Without equal – including the Kelvingrove compendium

In Edinburgh you will find the story of life from pre-historic times
Trace the evolution of creatures through to development of human societies
The origins of culture and art, the inventiveness of homo sapiens
In science, technology, engineering, communication, and space exploration
Man’s fight against disease, and his conquests against his fellow men

The whole realm of natural history is on display from primitive life
To Dolly the sheep and the latest revelations in genetics
And in the human sphere the history of fashion is traced in its glory and triviality
Then on a higher plane the world of ideas, of philosophy, religion and literature
Indeed this museum seeks to encapsulate the story of our world and beyond

But perhaps one of the most interesting things to consider is
The enormous contribution that native Scots (and others educated here)
Have made to the advancement of culture, health, physical science, human endeavour,
And the limitless quest for understanding. Thus we remember the names Stevenson,
Scott, Watt, Smith, Simpson, Livingston, Hume, Burns, Carlyle and so many others
Who sought to shed light and truth in each successive age 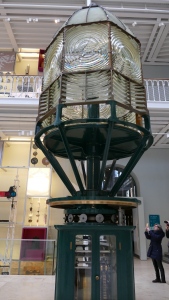